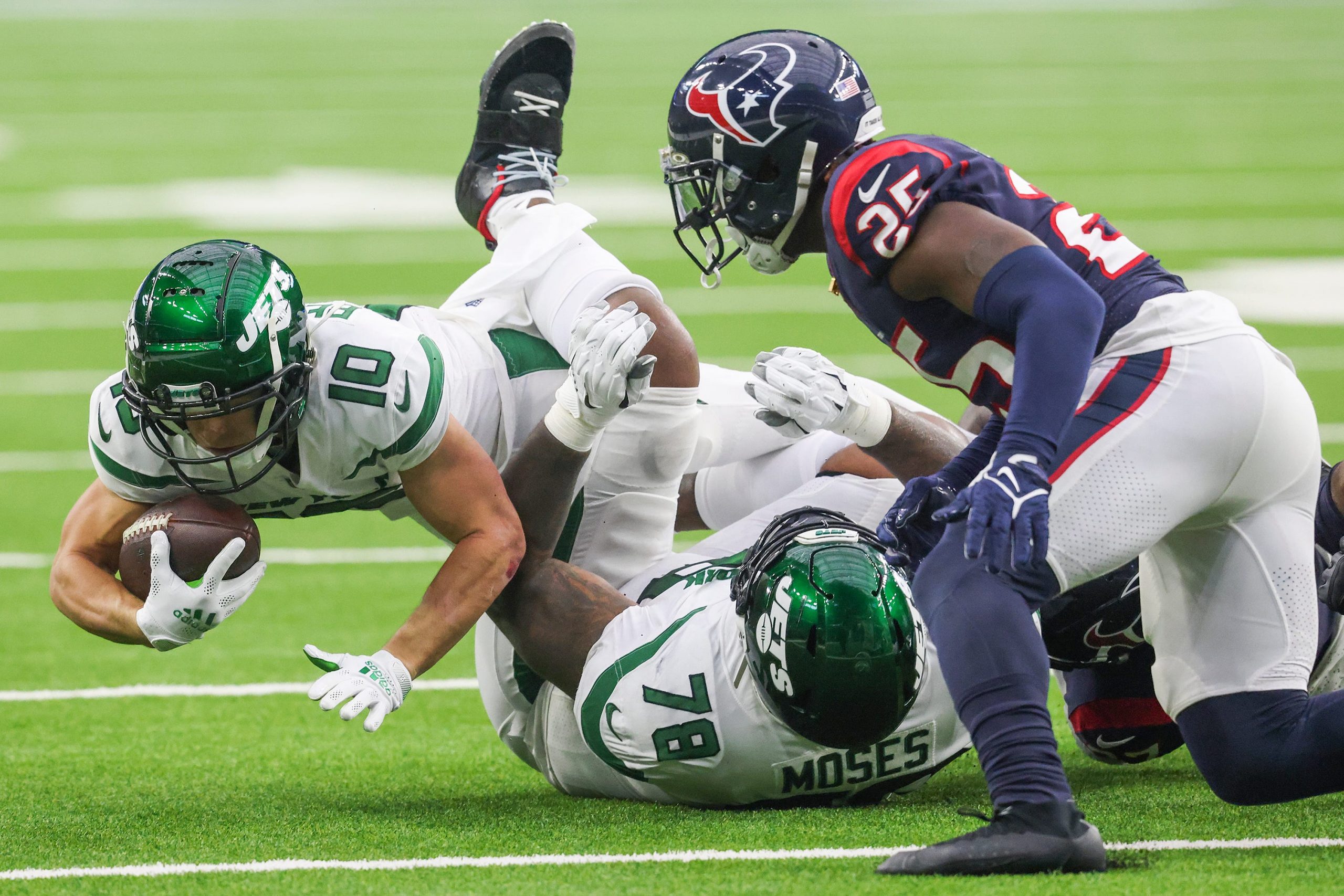 BetAnySports patrons may have noticed that the New York Jets have had four different quarterbacks throw for more than 200 yards in a game, and that might be some kind of record, though a dubious one, because they have won only two games all year. Now they go back to their opening game starter, as Zach Wilson, the second player taken in the NFL draft, returns to action against the Houston Texans.

While Wilson was sitting out with an injury, the Jets went through the drama that saw a journeyman like Mike White rising to the forefront and directing a victory over Cincinnati; Josh Johnson, who has spent most of his career on practice squads, it seems, stepping in for an injured White to throw for over 300 yards against Indianapolis, and veteran Joe Flacco getting the call last week against Miami and delivering a 291-yard performance.

But it seems as if this 2021 season was meant to be in service to the development of Wilson, who threw nine interceptions in 181 attempts before injuring his knee.

Houston is coming off a big victory over Tennessee, in which they intercepted Ryan Tannehill four times. But it was hardly a successful game from an offensive standpoint. This is a team that is dead last in the NFL in scoring, and in the opinion of many, they waved the white flag, so to speak, with some of their personnel moves.

In the pro football betting odds posted on this game by the folks at BetAnySports, the Texans are the favorites at NRG Stadium:

With Michael Carter on IR with an ankle sprain, Tevin Coleman will get additional reps for the Jets, and he has proven to have some problems in pass protection. But there has been a bright spot with Elijah Moore, the rookie wide receiver out of Ole Miss, who caught eight passes for 141 yards and a touchdown in the 24-17 loss to Miami last week. The Jets are hoping he’ll grow right along with Wilson.

As we mentioned, Flacco had 291 yards in last week’s game, but both he and White wound up on the Covid-19 list.  So they are not available for backup duty under any circumstances.

Until the Miami game, the Jets had allowed 178 points over their previous four contests. So this might seem a gift to Houston.

But the Texans, even in their 22 -13 win over Tennessee, gained only 190 yards from scrimmage. And they averaged just 2.2 yards per rushing attempt. This situation was not aided by the trade of Mark Ingram back to New Orleans. And in fact, he still has more than twice as many yards as any other running back they have on the roster. Wide receiver Brandin Cooks, who has total 859 yards, is wasting his talent with this ballclub. Maybe DeShaun Watson was thinking the same thing, as he demanded a trade, before getting involved in all his legal entanglements.

To us, it seems as if both offenses might have quite a time advancing the football. So the most judicious play here might be to go for and UNDER in the Jets-Texans encounter.

BetAnySports makes it possible for you to place wagers in a lot of different ways when you access Prop Builder…… Nobody in the business gives you as many ways to win. That includes real-time wagering that can be done through various avenues, like Super Lines, Ultimate Lines and Premier Lines……. And get more value when you place those bets by using reduced juice……. If you have Bitcoin, you’re in luck because you can open up an account in a few minutes, and you won’t have to pay a transaction fee!