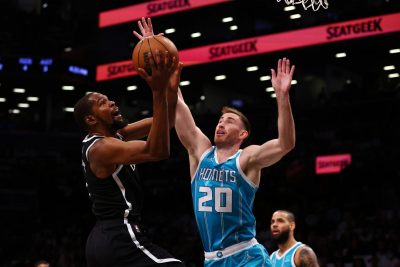 This Is The Sunday, March 27th NBA Report Where We Will Be Releasing Our Nets vs Hornets pick.

This Game Tips Off tonight at 7:30 PM Eastern Time in Brooklyn, and the Brooklyn Nets vs Charlotte Hornets betting odds have the Nets as 6.5 point favorites, with the over/under for the contest at 237.5 according to WynnBET.

To get tonight’s selections for Free, All You Need To Do Is Click The Link Below Or Go To Onlinesportsbet.com And We Will Send the pick to you Via Text Or Email. It’s that easy.

Ok, let’s get to our Kings vs Magic prediction.

As we all know, the mandate in Brooklyn was lifted this past week, thus allowing Kyrie Irving to play in home games for the first time this season. He is set to make his season home debut tonight against the Hornets. Although he’s only been able to play 20 games this season, his numbers in those games have been absolutely sensational. He is averaging 28.5 points per game, along with 4.6 rebounds and 5.5 assists. In the month of March however, He is averaging a whopping 38.8 points per game on 56.2% from the field. This month includes a 50-pt performance from him, and a 60-pt performance. Expect Kyrie to get a warm Brooklyn welcome that will fuel his playing in this game, along with Kevin Durant, to a large victory.

The Nets have won four of their last six games, including wins against the Milwaukee Bucks and the Philadelphia 76ers, the number two and three seeds respectively, in the Eastern Conference. Expect them to make this win number five of their last seven games, and handedly.

For our expert Brooklyn Nets versus Charlotte Hornets Prediction. Take the Nets -6.5.