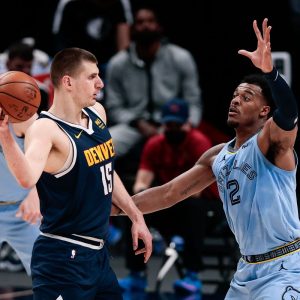 This Is The Monday, January 2nd NBA Report Where We Will Be Releasing Our Nuggets vs Grizzlies picks and parlays.

This Game Tips Off tonight at 9:00 P.M. Eastern Time in Denver,  and the Nuggets and Grizzlies odds from WynnBET have the Nuggets as a 4 point favorite, and has the over/under at 220.

Ok, let’s get to our Nuggets vs Grizzlies predictions.

This is a matchup of two of the more formidable teams in the west. The Grizzlies come off a rough loss against a Giannis led Bucks team. The Nuggets are coming off a thrilling overtime win against the Clippers in which Jokic had a 49 point triple double. For Memphis, they are still without their standout two way guard Dillon Brooks, and Ja left the game early after taking a scary elbow to the neck, but was able to return and finished with a 33 point effort. The Grizzlies have gone 8-2 in their last 10 games which is tied for the second best record in the last ten games. They were without their second leading scorer in their game against Milwaukee in Desmond Bane due to covid, but he will be back for the game. The Nuggets continue on without Micheal Porter Jr or Jamaal Murray and still are in the thick of things as they are seemingly each year. They have lost there last two games to the Grizzlies but only by a combined margin of 9 points. Look for this to be a hard fought defensively game where the victor pulls away at the end.