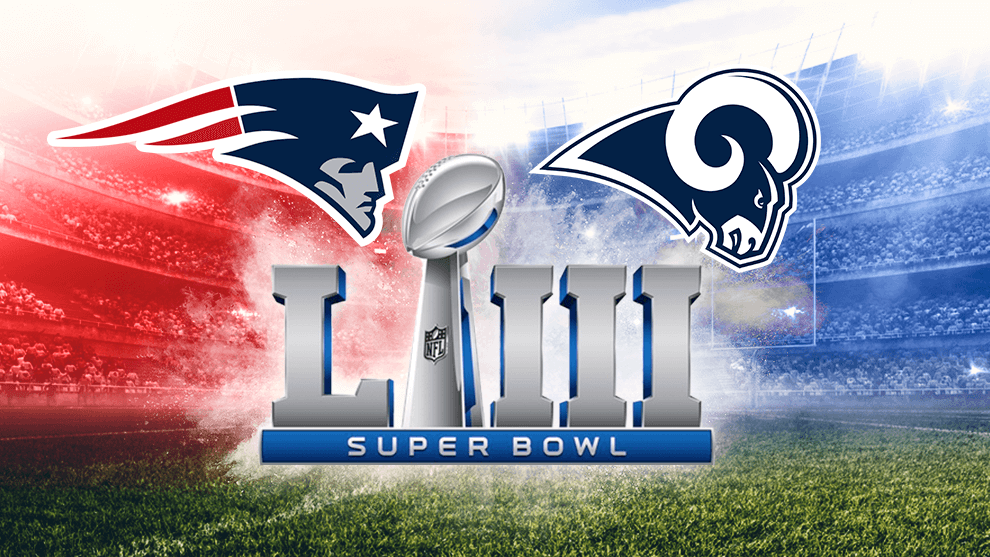 Shortly after New England Patriots’ running back Rex Burkhead put his team back into the Super Bowl for the third-straight season after scoring the game-winning touchdown in overtime, the AFC Champions opened as 2.5-point favorites over the NFC Champion Los Angeles Rams in Super Bowl LIII.

This season’s Super Bowl will be played in Atlanta’s Mercedes-Benz Stadium on Sunday, Feb. 3. Game time is set for 6:30 p.m. with CBS covering the game nationally. BetAnySports has set the total line for this matchup at 58 points.

The Patriots and the Rams entered the postseason as the No. 2 seed in their respective conference. They each closed as road underdogs for Sunday’s conference championships only to emerge with a straight-up win in overtime. The Patriots closed as three-point underdogs in their thrilling 37-31 win against Kansas City. The total line for that game went OVER 56 points. The Rams got past the New Orleans Saints 26-23 closing as three-point underdogs. The total stayed UNDER BetAnySports’ 55-point line.

The early moneyline odds for Super Bowl LIII have been set at -133 for New England and +113 for Los Angeles. The first half spread for the game favors the Patriots by a half a point with a total line of 28 points.

These two teams did not meet in the 2018 regular season, but New England has won the last five meetings SU going back to a 20-17 victory in Super Bowl XXXVI on Feb. 3, 2002. The Patriots closed as 14-point favorites in that game with the total staying UNDER 53 points.

New England went 13-5 SU with a 11-7 record ATS this season, including both playoff games. It covered the spread in its last three games with the total going OVER in both postseason contests. The Rams have a SU record of 15-3 while going 9-7-2 ATS. They have been able to cover the closing number at BetAnySports in their last four games with the total staying UNDER or ending as a PUSH in five of their last seven contests.

Tom Brady ended Sunday’s win in Kansas City with 348 yards passing after completing 30 of his 46 passing attempts for one touchdown and two interceptions. Rookie running back Sony Michel ran the ball 29 times for 113 rushing yards and two scores.