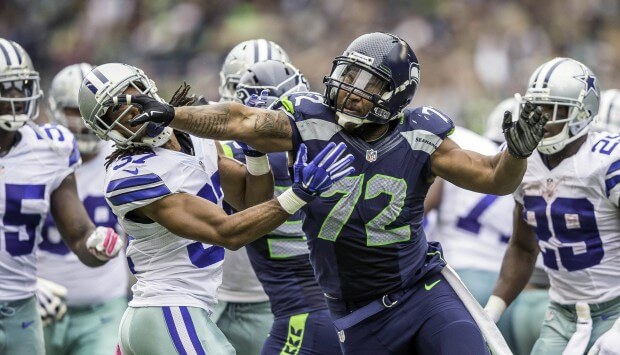 The opening playoff game in the NFC this Saturday pits the 10-6 Seattle Seahawks against the 10-6 Dallas Cowboys in a slated 8:15 p.m. start on FOX from AT&T Stadium.

The Seahawks return to the playoffs after a one-year hiatus on the strength of a straight-up 6-1 run over their last seven games. They failed to cover as heavy 14.5-point home favorites in Sunday’s tight 27-24 victory against Arizona to fall to 4-2-1 against the spread during this same span. Seattle went 4-4 SU on the road this season with a 4-3-1 record ATS. It managed to cover in five of seven games closing as an underdog.

Russell Wilson continues to make plays both throwing and running the ball, but this offense is still built around a running game that is averaging 160 yards per game. Chris Carson led the way with 1,151 total rushing yards on 247 carries, but there were three other players with at least 375 rushing yards this season. The Seahawks also stepped up their game on defense with an average of 21.7 points allowed.

Dallas is back in the postseason after winning the NFC East. It closed out the second half of its season at 7-1 SU with a 6-1-1 record ATS. The total went OVER BetAnySports’ 38.5-point closing line in Sunday’s 36-35 win against the New York Giants after staying UNDER in four of its previous six games. The Cowboys are 5-2-1 ATS at home this season and they went an even 3-3-1 ATS closing as favorites.

Taking a very similar approach on offense, Dallas turned to Ezekiel Elliott and the ground game to move the ball down field. He led the NFL in rushing this season with 1,434 yards on 304 carries. Much like Wilson, Dak Prescott was able to make enough plays throwing and running the ball to help his team win more than a few games this season. The Cowboys averaged 21.2 points per game while allowing 20.3 PPG on the other side of the ball.

Dallas has had its issues in the postseason and unfortunately for Cowboys’ fans that will continue on Saturday night with Seattle winning this game SU.