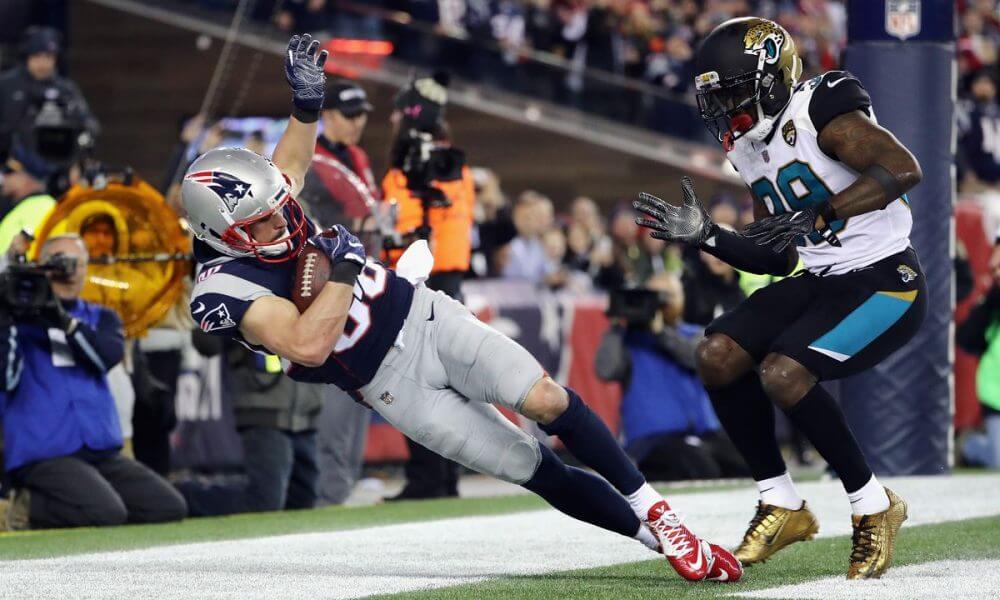 The top showdown in this Sunday’s late afternoon schedule pits the New England Patriots against the Jacksonville Jaguars in a rematch of last season’s AFC title game. Kickoff from TIAA Bank Field is set for 4:25 p.m. on CBS.

The Patriots held off Houston 27-20 last Sunday as 6.5-point home favorites to get their season started in the right direction with total staying UNDER BetAnySports’ closing 49.5-point line. New England is now 11-3 against the spread over its last 14 games, but it failed to cover as an eight-point favorite at home in last season’s 24-20 victory against the Jaguars in the AFC Championship. The total stayed UNDER the 45.5-point line in that game.

Tom Brady looked sharp in this season’s debut with 277 yards passing and three touchdown throws. He completed 26 of his 39 passing attempts to eight different players. Tight end Rob Gronkowski led the way with seven receptions for 123 yards and a score. The Patriots added another 122 yards on the ground with Rex Burkhead gaining 64 yards on 18 rushing attempts.

sonville grinded out a 20-15 victory against the New York Giants in its season opener, closing as a three-point favorite on the road. The total in that game stayed UNDER the closing 42.5-point line at BetAnySports. The Jaguars have gone 6-3 ATS in their last nine games with a 4-2 record ATS in their last six games at home. The total has gone OVER in 10 of their last 15 games played on their home field.

The Jaguars had one of the best defenses in the NFL last season and it came through on Sunday against New York. It held the Giants to 324 yards of total offense and one rushing touchdown. On the other side of the ball, Jacksonville ran the ball 28 times for 137 yards. TJ Yeldon led the way with 51 yards after Leonard Fournette went down with a hamstring injury. His playing status for this Sunday remains questionable.

In a meeting between two of the top teams in the AFC, I would expect another close, hard-fought battle that comes down to the final gun. With Jacksonville getting a few points as a home underdog, I have the Jaguars avenging last year’s loss in New England with a SU win.