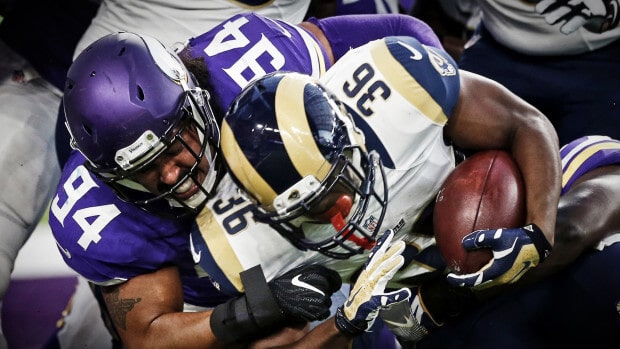 NFL Network’s Thursday Night Football matchup in Week 4 is a key NFC tilt between the Minnesota Vikings and the Los Angeles Rams in an 8:20 p.m. start at Memorial Coliseum.

It has been a straight-up 1-1-1 bumpy start for Minnesota while going 1-2 against the spread in its first three games. An early win against San Francisco at home followed by a tie against Green Bay on the road has been completely overshadowed by Sunday’s stunning 27-6 loss to Buffalo as a heavy 16.5-point home favorite with BetAnySports. The total has stayed UNDER in two of the Vikings’ first three contests.

Sunday’s loss to the Bills was a blowout from the start with a meaningless fourth quarter score preventing the shutout. There has to be some concern with Kirk Cousins turning the ball over three times in that game, but the simple fact that the Vikings gained just 14 yards on the ground with their six rushing attempts speaks volumes about the issues on this side of the ball

The Rams have done nothing but live up to the hype as one of the top teams in the NFC with a perfect 3-0 start both SU and ATS. They have put up at least 33 points in each of those wins while holding their opponents to a combined 36 points on defense. The total went OVER BetAnySports’ closing 49-point line in this Sunday’s 35-23 victory over the Los Angeles Chargers as seven-point home favorites after staying UNDER in the first two games

The star power in Los Angeles has been at its best with Jared Goff throwing for 941 yards and six touchdowns and Todd Gurley running the ball 62 times for 255 yards and four touchdowns. The addition of Brandin Cooks to the passing game has been a major plus with 19 receptions on 25 targets. He leads the team in receiving yards with 336.

It is hard to overlook just how bad the Vikings played last Sunday and how the Rams have established themselves as the frontrunner in the NFC. Lay the points and take Los Angeles both SU and ATS on Thursday night.