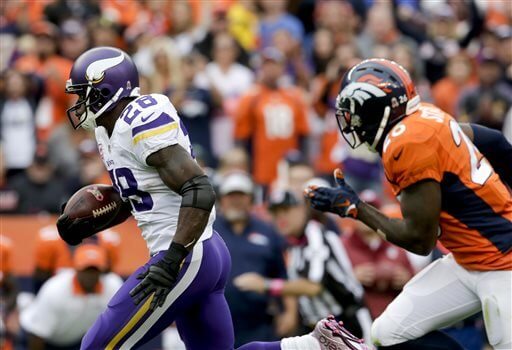 Saturday’s featured preseason game on the NFL Network pits the Minnesota Vikings on the road against the Denver Broncos. Kickoff for this inter-conference tilt is set for 9 p.m. at Sports Authority Field.

The Vikings went from an even 8-8 straight-up record in 2016 to 13 wins and a trip to the NFC title game last season. BetAnySports has them listed as +115 favorites to win the NFC North Division title and +700 third-favorites to win the NFC behind Philadelphia (+550) and the Los Angeles Rams (+650). When it came to betting on Minnesota last year, it went 2-2 SU in the preseason and 1-3 against the spread.

Case Keenum will be on the Denver sideline this Saturday night with Kirk Cousins in place as the Vikings’ new starting quarterback. He probably will not see all that much action in this game if any. Trevor Siemian is listed as his immediate backup along with second-year quarterback Kyle Sloter. Minnesota used two of its first three draft picks to shore up a defense that was already ranked first in the NFL last season in points allowed (15.8).

Denver continued to move in the wrong direction just three seasons removed from a Super Bowl title with a SU 5-11 record last season. This followed a nine-win campaign the season before. The Broncos were even worse ATS at 4-11-1 in 2017 and they failed to cover in four of their last five home games. When it came to last year’s preseason, they went a perfect 4-0 SU with a 3-0-1 record ATS.

Keenum may have been Denver’s biggest free-agent signing in the offseason, but much of the excitement for a quick reversal of fortunes has revolved around the addition of defensive end Bradley Chubb with the fifth overall pick in the draft. Most of the Broncos’ recent success could be attributed to their shutdown defense which slipped to 22nd in the NFL last season in points allowed (23.9).

With the betting line set as a PICK at BetAnySports, my lean in this one is towards Denver playing at home. We all know that preseason games do not count in the standings, but the Broncos need to reestablish a winning culture coming off last season’s slide of 10 losses (SU and ATS) over their final 12 games.