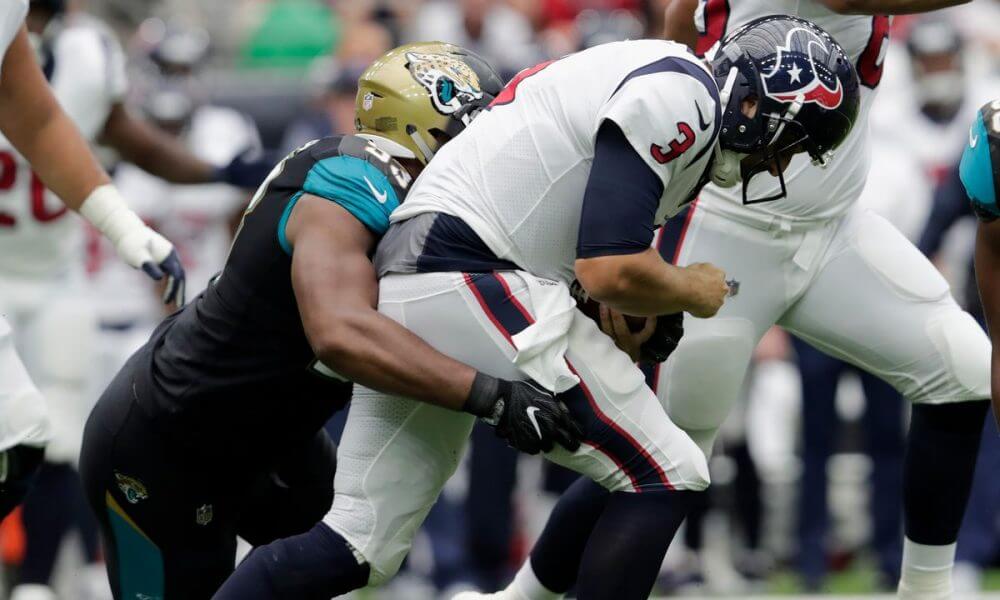 Two teams trying to get a leg up in the jumbled AFC South clash this Sunday with the Houston Texans going on the road to face the rival Jacksonville Jaguars. Game time from TIAA Bank Field is set for 1 p.m. on CBS.

Houston was able to even its straight-up record to 3-3 with Sunday’s 20-13 win against Buffalo as a 10-point home favorite. This was the fifth time in its first six games that it failed to cover against the spread at BetAnySports. The total stayed well UNDER the closing 40.5-point line and it has stayed UNDER in four of the Texans’ first six games. They head on the road for this division clash at 1-2 both SU and ATS in their first three road games this season.

Deshaun Watson was intercepted twice while also losing a fumble in Sunday’s win against Bills. He ended the game completing 15-of-25 passes for 177 yards. Watson was also sacked seven times for a loss of 35 yards. Houston’s ground game was not all that much better with 74 rushing yards on 24 rushing attempts. There is definitely a smoke and mirror aspect to how this team has won its last three games.

The Jaguars has now lost three of its last four games both SU and ATS after getting steamrolled in Dallas 40-7 on Sunday as three-point road favorites. At an even 3-3 SU and ATS, they are in a three-way tie with Houston and Indianapolis in the AFC South. The total went OVER the closing 39.5-point line against the Cowboys and it has gone OVER in three of the Jaguars last five games. The are 2-1 SU and ATS through their first three games at home this year.

Facing a 24-0 deficit at the half, Jacksonville was forced to rely upon Blake Bortles to move the ball quickly down the field through the air. He ended the game completing 15 of his 26 passing attempts for 149 yards. He was taken to the turf for a loss three times and picked off once. In the absence of Leonard Fournette, the Jaguars gained just 64 yards running the ball on 18 rushing attempts. You can only put so much pressure on your defense and still expect to win games.

Houston just grinded its way past Buffalo in a game it could have easily lost and Jacksonville was thoroughly beaten its last time out. I have the Jaguars bouncing back SU and ATS with a win over a Texans’ team that is relying more on luck than solid play to win games.