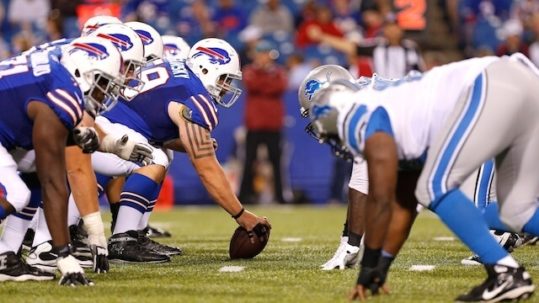 Friday night’s featured NFL Week 3 preseason matchup on CBS is an inter-conference clash between the Buffalo Bills and the Detroit Lions. Game time from Ford Field is set for 8 p.m.

Buffalo slipped to 6-10 straight-up last season after making the AFC playoffs as a wild card team the season before. The Bills went an even 2-2 both SU and against the spread last preseason before losing seven of their first nine regular season contests. They started this year’s exhibition campaign with victories over Indianapolis at home and Carolina on the road both SU and ATS as slight underdogs in each contest. The total went OVER in each game.

In last Friday’s 27-14 win at Carolina, Josh Allen looked sharp in completing nine of his 11 passing attempts for 102 yards. Matt Barkley threw the lone touchdown pass for the Bills as part of his 110 yards passing. Buffalo added another 94 yards rushing the ball on 31 carries for an average of 3.0 yards per game. Veteran back LeSean McCoy ran the ball four times for six yards and he scored the lone rushing touchdown.

The Lions assumed the role as the worst team in the NFC North last season at 6-10 SU. They have yet to win in the preseason with a 31-3 loss to New England in Week 1 as 2.5-point home favorites. This was followed by a 30-23 loss to Houston on Saturday as three-point road underdogs. The total stayed UNDER BetAnySports’ closing 35-point line in Week 1 and it went OVER 40.5 points against Houston.

Both David Fales and Josh Johnson took turns running the Lions’ offense on Saturday night. Fales completed 12-of-19 passes for 226 yards and a score. Andy Jones hauled in two catches for 60 yards, including a 48-yard catch on five targets. Detroit ran the ball 22 times for 90 yards to average 4.1 yards per carry. Matthew Stafford should see his first action of the preseason in some limited playing time against the Bills.

Both teams have played things pretty close to the cuff the first two games, but I would expect each offense to open things up a bit more in Week 3. I like the Lions at home, but I am betting the OVER at BetAnySports.