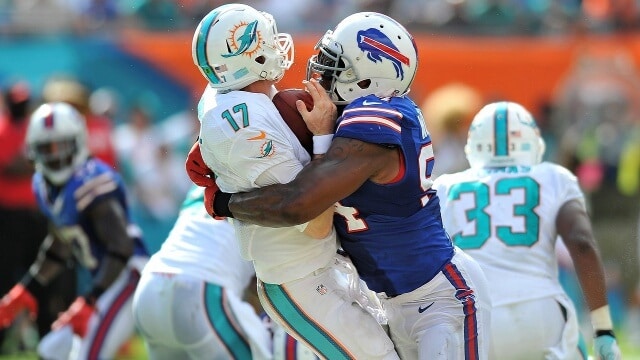 The 4-7 Buffalo Bills go on the road this Sunday to Hard Rock Stadium to renew an AFC East rivalry against the 5-6 Miami Dolphins. Game time on CBS is set for 1 p.m.

The Bills have been a tough team to figure out this season. They have gotten their doors blown off more than once while also beating Minnesota straight-up and covering against Houston on the road. With Sunday’s 24-21 upset against Jacksonville as three-point home underdogs, they have won their last two games both SU and ATS closing as underdogs. The total has gone OVER BetAnySports’ closing line in Buffalo’s last three games.

Josh Allen has made his fair share of mistakes as a rookie quarterback for the Bills, but he made enough plays on Sunday to get his team a much needed win. He only completed eight of his 19 passing attempts for 160 yards, but one of those completions was a touchdown pass to Robert Foster. Allen was the team’s leading rusher in that game with 99 yards and a score on 13 carries. Buffalo is averaging just 14.5 points per game and its defense is allowing 24.7 PPG.

Miami still has an outside shot at a wild card spot in the AFC, but it cannot afford to lose any more games it is supposed to win. The Dolphins have lost four of their last five games SU, but they were able to cover as nine-point road underdogs in Sunday’s 27-24 loss to Indianapolis. Miami is 3-5 ATS in its last eight games overall. However, it been able to cover in four of five home games this season. The total has stayed UNDER in its last three games.

The Dolphins had their chances to win on Sunday, but in the end, they could not come up with a big play. Ryan Tannehill returned to the starting lineup at quarterback for the first time since early October and he completed 17 of his 25 passing attempts for 204 yards and two touchdowns against no interceptions. Miami’s defense had no answer for stopping Andrew Luck and the Colts’ offense, which gained a total of 455 yards in that game.

My lean would be towards Miami at home, but I do not see either offense lighting things up this Sunday in a game that stays UNDER BetAnySports’ total line.