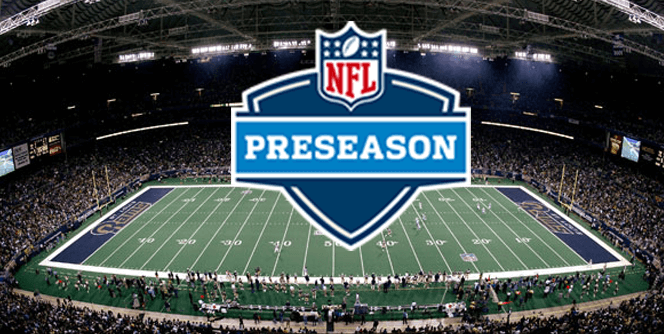 Along with a full slate of MLB action in a number of key division title races in the regular season, this weekend marks the start of the four-game NFL preseason with Week 1 action over the next few days. While the games may not count in the standings, they still offer a great opportunity to cash a few early NFL winning tickets at BetAnySports online sportsbook.

Also on the board at the top online sportsbook for US players is a full set of betting odds for golf’s final Major with the start of the PGA Championship on Thursday at Bellerive Country Club in St. Louis. Dustin Johnson has been listed as a +800 favorite to win and Tiger Woods is fourth on the list at +1600 betting odds to win his first Major since 2008. NASCAR heads to Michigan International Speedway for Sunday’s Consumers Energy 400. The summer horse racing season heats up with the running of Saturday’s Arlington Million as one of the top turf races heading into this fall’s Breeders’ Cup.

The NL West remains the tightest division race in the Majors with four of the five teams still in contention for the title. The Los Angeles Dodgers and the Colorado Rockies are two of the teams chasing Arizona for the lead. They will kick off a crucial four-game series in Colorado this Thursday night. Friday’s matchup will be the featured game on ESPN + starting at 8:40 p.m. (ET)

Thursday night also features the first round NFL preseason matchups with 12 games on the slate. The NFL Network offers a doubleheader of action starting with Cleveland on the road as a one-point road favorite against the New York Giants at 7 p.m. In a 10 p.m. start out on the West Coast, Dallas will head to San Francisco as a 3.5-point underdog with BetAnySports.

Each of Friday’s preseason games will be broadcast nationally by NFL Network starting with Atlanta on the road against the New York Jets at 7:30 p.m. as a 3.5-point underdog. The second matchup pits Detroit on the road against Oakland in Jon Gruden’s debut as the Raiders new head coach. His team is set as a three-point favorite.

The final two games in Week 1 of the NFL preseason are set for Saturday night with Minnesota going on the road to face Denver in a PICK followed by an inter-conference clash between the Los Angeles Chargers and Arizona with the Cardinals favored by 2.5 points at home.