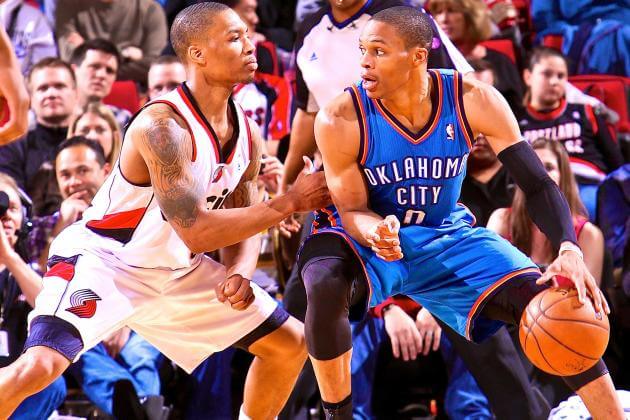 Monday’s big 109-104 road victory against Utah as another division rival was the Trail Blazers’ third win in a row both straight-up and against the spread on BetAnySports’ closing line. Portland closed as a five-point underdog in that game and the total stayed UNDER 218.5 points. It is 6-1 ATS over its last seven games overall and the team improved to 9-12 on the road this season both SU and ATS.

Damian Lillard has led the way in scoring all season long with an average of 26.1 points per game and he matched that average on Monday against the Jazz with 26 points while going 10-for-20 from the field. As a team, Portland shot 50 percent from the field while converting on eight of its 18 three-point attempts. On the year, the Trail Blazers are shooting 46.1 percent overall and 35.9 percent from three-point range.

Oklahoma City was also in action on Monday and it came away with a two-game East Coast sweep after beating Philadelphia on Saturday and New York last night. The Thunder covered as 3.5-point road underdogs in a tight two-point win against the 76ers and they closed as nine-point favorites in the 127-109 victory against the Knicks. They return home for Tuesday’s matchup at 14-7 SU and 11-10 ATS in 21 previous home games this season. OKC is still just 3-5 ATS in its last eight games.

points, 10 rebounds and nine assists to the winning cause. George is the team’s leader in scoring this season with 26.8 PPG. The Thunder are ranked seventh in the NBA in scoring with an average of 113.8 PPG and they have also played well on defense with a points-allowed average of 109.0 that is ranked 11th in the league.

Oklahoma City drew first blood in the season series with a tight two-point win in Portland as a one-point underdog on Jan. 4. Look for another tight game on Tuesday with the Trail Blazers covering with the 5.5 points at BetAnySports.