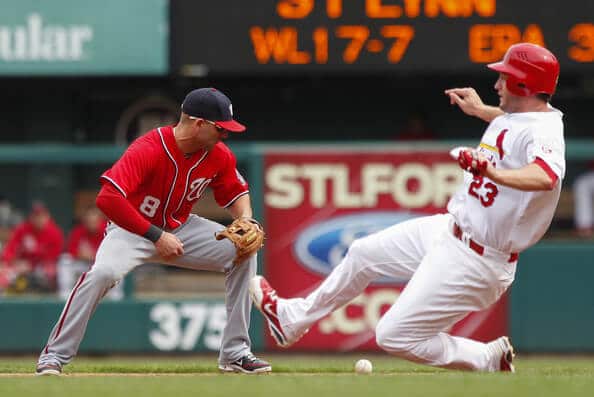 Monday night’s featured MLB matchup on ESPN + is a NL clash between the Washington Nationals and the St. Louis Cardinals in the first of an extended four-game series. The first pitch from Busch Stadium is set for 8 p.m.

The Nationals remain in striking distance in the NL East at 60-58. They are 5.5 games in back of Philadelphia and Atlanta, but they have not helped their cause with four losses in their last six games. They dropped two of three to the Chicago Cubs this weekend to start this seven-game road trip on a losing note. The total stayed UNDER BetAnySports’ closing line in two of the three games.

Washington will try and get this road series started on a winning note with Tommy Malone on the mound. This will be his fourth start of the season and he comes in with a 5.50 ERA and a 1.17 WHIP. Last Wednesday against Atlanta, the left hander got shelled for seven earned runs on 10 hits including a trio of home runs over his six innings on the mound. This followed a solid seven-inning effort in his previous start against the New York Mets on Aug. 1

St. Louis remains in the hunt in the NL Central Division race at 63-55. With its current five-game winning streak, it is 5.5 games in back of the Cubs. The Cardinals swept Kansas City in three road games over the weekend following 2-1 series victories against Pittsburgh and Miami during this recent nine-game road trip. St. Louis returns home for its next seven games with a 29-26 record at Busch Stadium this season. The total has gone OVER in three of its last four home games on BetAnySports’ betting line.

Look for Miles Mikolas to get the start on Monday night for St. Louis. The right hander is 12-3 this season with a solid 2.74 ERA and a 1.07 WHIP. The Cardinals are now 6-1 in their last seven games when he gets the start. Last Tuesday in the team’s 3-2 victory against Miami, Mikolas lasted seven full innings while allowing just two earned runs on five hits.

I would have to give the Cardinals the clear edge with Mikolas on the mound. They were hot on the road the last week or so and I think that carries over to Game 1 of this series at home on Monday night.