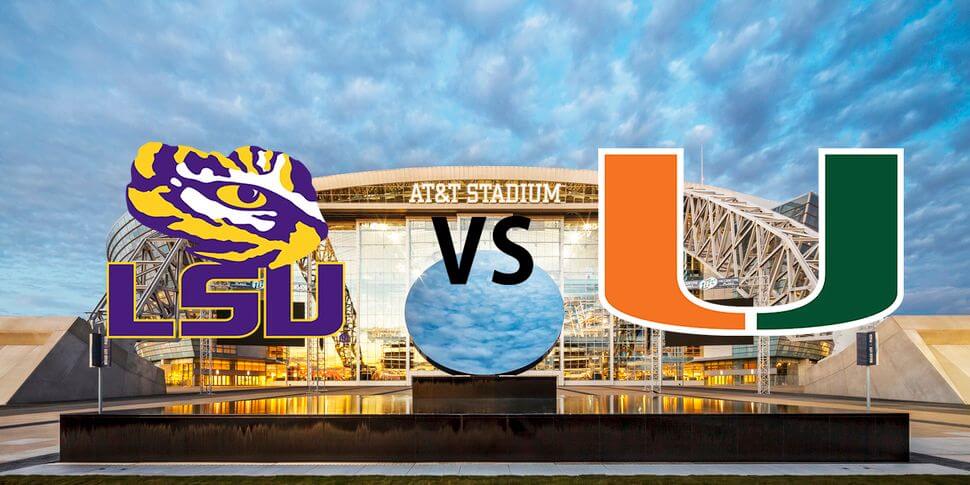 The ACC’s Miami Hurricanes kickoff their 2018 football season with a neutral-site showdown against the SEC’s LSU Tigers this Sunday night at AT&T Stadium in Arlington. Game time is set for 7:30 p.m. on ABC.

The expectation level remains high for Miami as the Clemson Tigers’ biggest competition for the ACC title this season. The Hurricanes won their first 10 games last season straight-up before losing their last three, including a loss to Clemson in the 2017 ACC Championship. They went just 5-8 against the spread with the total staying UNDER in 10 of the 13 games on BetAnySports’ closing line.

Miami will once again have Malik Rosier under center at quarterback as a fifth-year senior. He completed 54 percent of his 415 passing attempts last season for 3,120 yards, but that percentage dropped to just 44 percent in the Hurricanes’ three-game losing streak. He tossed 26 touchdowns against 14 interceptions. Miami’s biggest strength is still its defense which returns a number of key starters from last year’s unit that held opposing teams to 19.9 points per game.

The Tigers overcame a stunning loss to Troy as 20.5-point home favorites in their fifth game of the 2017 season to finish at 9-4 SU. LSU was able to cover the spread in six of its last seven games after going a costly 1-5 ATS in its first six contests. The total stayed UNDER 55 points in a 21-17 postseason loss to Notre Dame as a one-point underdog. It stayed UNDER BetAnySports’ closing line in four of the Tigers’ last five games.

As one of five nationally ranked teams in the SEC heading into Week 1, LSU could be one of the most interesting contenders in this power conference. The Tigers will turn to Joe Burrow as their starting quarterback for Sunday night after coming to LSU as a transfer. This is another team that will go as far as its defense can take it. This unit ended the 2017 season ranked 11thin the nation in total yards allowed and it was 16thwhen it came average points allowed (18.8).

This should be a great matchup that stays close all the way to the final gun. My SU lean would be towards LSU, but my ‘best bet’ pick is the UNDER on the 47-point total line.