No. 2 Clemson vs. No. 1 Alabama: Free CFP Championship Pick 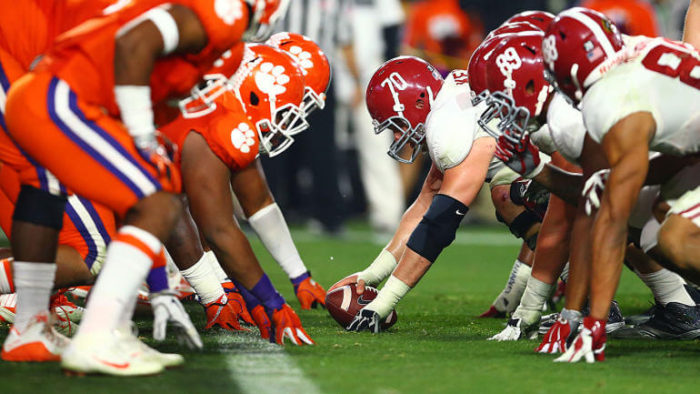 No. 2 Clemson vs. No. 1 Alabama: Free CFP Championship Pick

The season’s national title game features the ACC’s No. 2 Clemson Tigers against the SEC’s No. 1 Alabama Crimson Tide. Game time for Monday night’s matchup on ESPN from Levi’s Stadium is set for 8 p.m. (ET).

Clemson made short work of Pittsburgh 42-10 as a 28-point favorite in the ACC title game and it really raised the bar on Saturday with a 30-3 beatdown of Notre Dame in this season’s Cotton Bowl closing as a 10.5-point favorite at BetAnySports. The Tigers were 8-6 this season against the spread along with their 14 straight-up victories. They have been able to cover the closing spread in seven of their last nine games with the total staying UNDER in four of their last five outings.

The Tigers dominated their College Football Playoff semifinal matchup in every phase of the game to basically put the Irish away by halftime. Freshman quarterback Trevor Lawrence completed 27-of-39 passing attempts for 327 yards and three scores. The offense added another 211 yards rushing the ball on 37 carries while the Tigers’ defense held Notre Dame to 248 yards of total offense.

Alabama survived its only close call of the season against Georgia in the SEC Championship by beating the Bulldogs 35-28 as 12-point favorites. The Tide were able to hold off Oklahoma in Saturday’s Orange Bowl 45-34 closing as 14.5-point favorites at BetAnySports. The total stayed UNDER 80.5 points in that game after going OVER in their previous three games. Alabama is now 1-3 ATS over its last four games.

The Tide had a 31-10 lead against the Sooners heading into halftime before giving up some ground in the second half. Sophomore quarterback Tua Tagovailoa put the ball up 27 times in that game and he completed 24 passes for 318 yards and four touchdown throws. During the regular season, he had 3,671 total yards passing and 41 passing touchdowns. Alabama averaged 325.6 passing yards and 54.9 points per game.

I have been impressive with Clemson’s dominance in two postseason games and concerned with the total amount of points that Alabama has allowed in its last two contests. That is why I am taking the six points and the Tigers to cover.