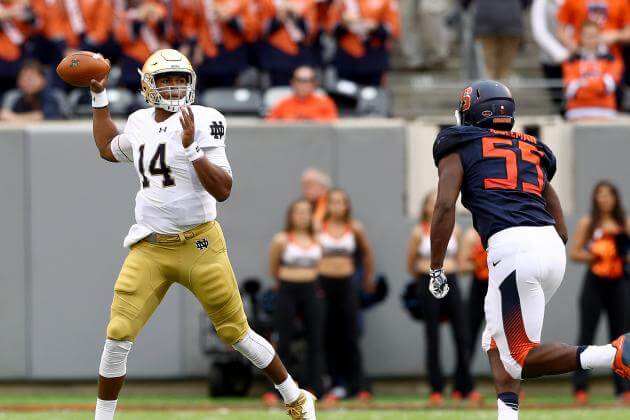 One of the top matchups on Saturday’s Week 12 college football slate pits the red hot Syracuse Orange against the Fighting Irish of Notre Dame. Kickoff in South Bend is set for 2:30 p.m. with NBC carrying the game nationally.

Syracuse first caught bettor’s attention in late September when it covered as a heavy 24.5-point road underdog in a tight 27-23 loss to Clemson. It went on to lose to Pittsburgh as a 3.5-point road favorite before reeling off four straight-up victories in its last four outings while going 3-1 against the spread. The Orange come into this showdown at 8-2 SU with a 7-3 record ATS. The total has gone OVER in four of their last five games.

In Friday night’s 54-23 romp over Louisville as a 20.5-point home favorite, Syracuse scored 30 points in the second quarter to put this game away early. Eric Dungey put the ball up 27 times and he completed 14 passes for 192 yards and a score. The Orange did the bulk of the damage on the ground with 326 rushing yards on 55 attempts. Moe Neal ran for 159 yards and two scores on just eight carries.

The Fighting Irish need to avoid a letdown heading into their final two games to secure a spot in the College Football Playoff. They moved to perfect 10-0 SU with Saturday’s 42-13 romp over Florida State to cover as 17.5-point home favorites. Notre Dame is 5-4-1 ATS and the total has now gone OVER BetAnySports’ closing line in six of its last seven outings. It is has covered in half of its first six home games this season.

Brandon Wimbush got the start for an injured Ian Book at quarterback against Florida State and he struggled a bit with 12 completions on 25 passes for 130 yards. He threw three touchdown passes against two interceptions. This is another offense that gains the bulk of its yards running the ball. Against the Seminoles, Notre Dame piled up 365 yards and two scores on 50 rushing attempts. Dexter Williams led the way with 202 yards rushing on 20 carries.

This will be a good test for Notre Dame and while it should pass that test SU, I will take the points at BetAnySports with a play on Syracuse ATS.