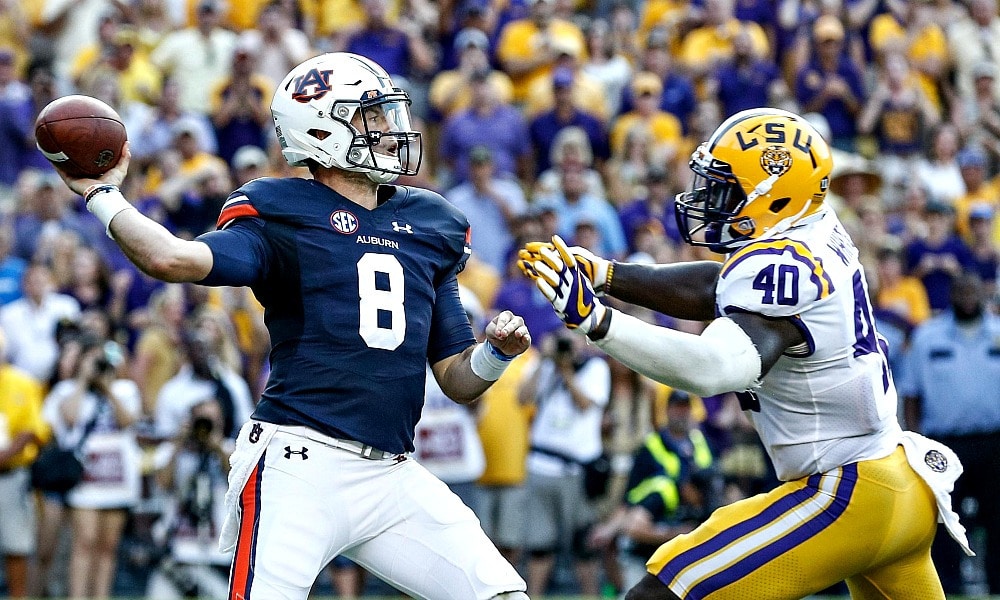 The biggest showdown in college football this Saturday is a SEC tilt between the No. 12 LSU Tigers and the No. 7 Auburn Tigers in a 3:30 p.m. kickoff on CBS from Jordan-Hare Stadium.

LSU came into the new season ranked No. 25 in AP Top 25 preseason poll and it made big move up the list with a 33-17 upset over then-No. 8 Miami (FL) as a three-point underdog. Last Saturday, the Tigers hammered Southeastern Louisiana 31-0 at home, but they could not cover the hefty 40-point spread at BetAnySports. They are 6-3 against the spread in their last nine road games with the total staying UNDER in six of their last seven games on the road.

Behind a bruising ground game and a shutdown defense, LSU is in position to make a major move in the national polls with another big upset this Saturday. Nick Brossette has rushed for 262 yards and two touchdowns on 41 carries as part of the Tigers’ 340 total rushing yards in their first two games.

The Auburn Tigers made a quick move in the AP rankings with a 21-16 victory against then-No. 7 Washington as slight 1.5-point home favorites in their season opener. They closed as 62.5-point favorites at home in last Saturday’s 63-9 romp over Alabama State. The Tigers have covered in 11 of their last 14 games, but they fall to 2-4 ATS in their last six games at home. Auburn has a 5-1 edge ATS in its last six home games against LSU.

These Tigers have been a duel threat on offense with 411 yards through the air and 576 yards on the ground in their first two games. Jarret Stidman has completed 32 of his 47 passing attempts for 386 yards and two touchdown. Their rushing attack has been balanced with three different backs gaining at least a 120 yards led by JaTarvious Whitlow with 150 yards rushing on 22 carries.

Each of these teams have established themselves as national powers in the SEC along with No. 1 Alabama, but I am laying the 9.5 points at BetAnySports and going with the Auburn Tigers both SU and ATS in Saturday’s showdown.