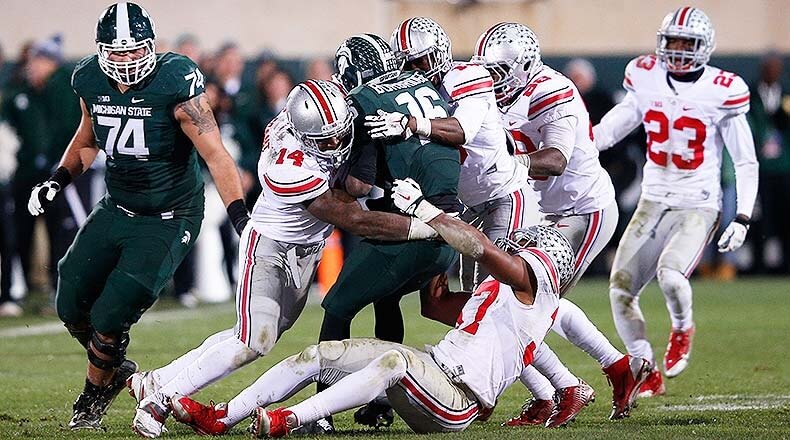 Saturday’s betting action in Week 11 of the college football season gets underway with a High Noon showdown on FOX in the Big Ten East Division between the Ohio State Buckeyes and Michigan State at Spartans Stadium.

The 8-1 Buckeyes know that they need to win out to have any shot at getting back into the College Football Playoff picture. They had their hands full last week at home as 17.5-point favorites in a tight 36-31 win against Nebraska. This was their first game since that stunning straight-up loss to Purdue on Oct. 20. Ohio State has failed to cover against the spread in its last five games and the total has stayed UNDER BetAnySports’ closing line in four of its last six contests.

Ohio State went into halftime of Saturday’s game against Nebraska trailing 21-16. Dwayne Haskins threw for 252 yards and two scores and JK Dobbins added 163 rushing yards and three rushing touchdowns to help pull out the win. The Buckeyes are ranked third in the nation in passing yards per game and they are 10th in scoring with 42.2 points per game.

Michigan State has gone 3-1 both SU and ATS in its last four games with the lone loss coming against bitter rival Michigan in a 21-7 setback on Oct. 20 as a 7.5-point home underdog with BetAnySports. The total stayed UNDER the closing line in all four games. The Spartans are 6-3 SU overall with a 4-5 record ATS. They have gone 7-2 SU in their last nine home games.

The main reason why Michigan State has a legitimate chance to win this game SU is a shutdown defense that is 16th in the nation in points allowed (19.0). The Spartans have lowered this average to 13.5 points over their last four games. Points have been hard to come by at times with a scoring average of 23.4 PPG, but Brian Lewerke has done a decent job moving the ball downfield through the air with 1,740 total passing yards.

Ohio State appeared to be in a fog against the Cornhuskers and that could spell trouble in a stern test on the road. The extra half point on the current spread favors the home team and I am leaning that way with a play on Michigan State.