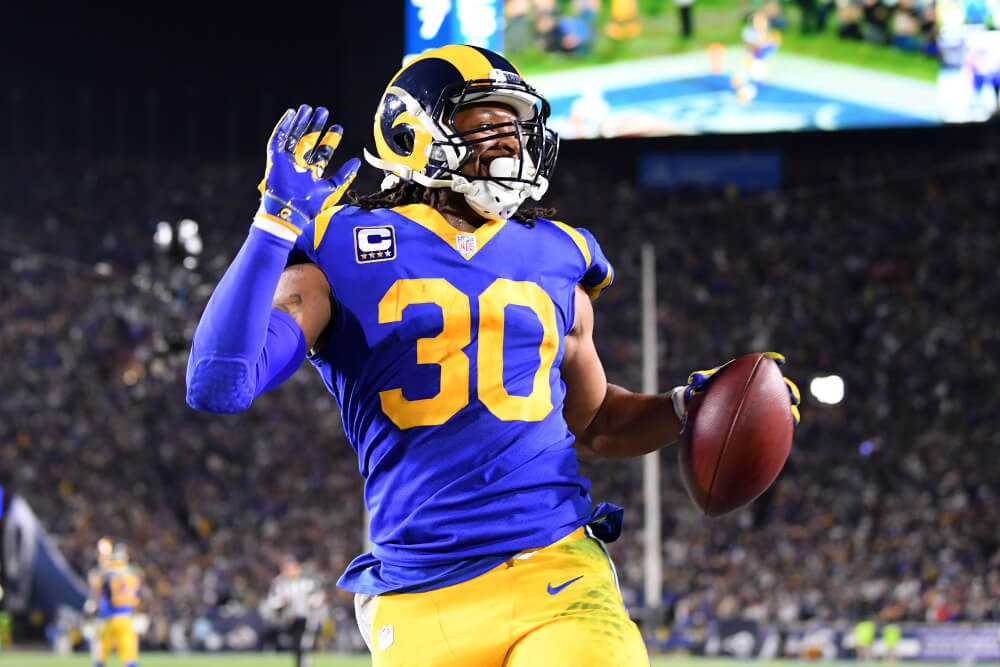 With the Los Angeles Rams taking on the New Orleans Saints in the NFC Championship ahead of a showdown between the New England Patriots and the Kansas City Chiefs in the AFC title game, you would think all the talk this week leading up to Championship Sunday would be about the four high-profile starting quarterbacks for each of the four teams.

Running backs were the story in the Divisional Round of the playoffs and they could be front and center again this Sunday. To add some even more excitement to the action on the field, BetAnySports has released a full list of player props for each game. Some of the best value in the betting odds revolve around a pair of running backs that could have a huge impact on the eventual outcome of their game.

Todd Gurley led the Rams in rushing during the regular season with 1,251 yards, which was the third-highest total in the league. However, veteran back CJ Anderson led the way in last Saturday’s win against Dallas with 123 yards rushing on 23 carries. Gurley was a close second with 115 rushing yards on 16 attempts.

The prop bet odds for Gurley’s total rushing yards in Sunday’s game against the Saints favor the UNDER on 72.5 at -120. The odds he rushes for at least 73 yards are set at an even-money +100.

Gurley missed his last two regular season starts due to injury, but he appeared to be in top form in the Divisional Round. This could set the stage for a big game on Sunday as the featured back. He rushed for 68 yards on 13 carries in the first meeting against New Orleans, but Sunday’s increased workload should take him OVER 72.5 yards this time around.

New England’s rookie running back Sony Michel added a big boost to the offense’s ground game in the regular season with 931 rushing yards on 209 attempts. He is coming off one of his best performances of the year in last Sunday’s win against the Los Angeles Chargers with 129 rushing yards on 24 carries.

The betting odds that Michel rushes for more than 75.5 yards against the Chiefs are set at -125 with the odds set at +105 for a bet on the UNDER.

Michel ran the ball 24 times for 106 yards in the Patriots’ 43-40 victory against Kansas City during the regular season and I see him being a big part of this Sunday’s game plan to cash in on the OVER 75.5 yards in this prop.