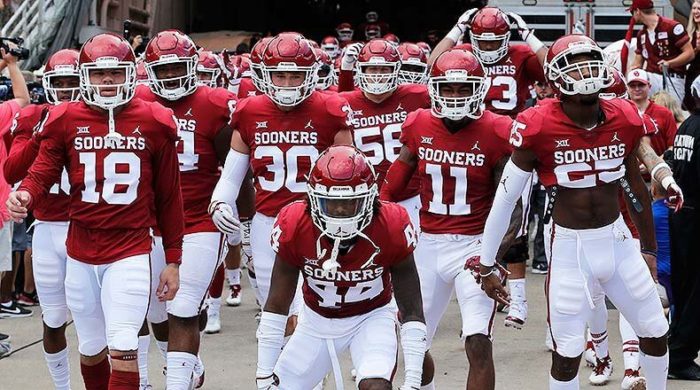 The reigning Big 12 champion Oklahoma Sooners will kick off their 2019 season on Sunday night when they host the Houston Cougars. BetAnySports has the No. 4 Sooners favored by 23 points at home with an over/under of 79.5 points.

Oklahoma coach Lincoln Riley has the unusual task of replacing a Heisman-winning quarterback for the second straight year. To do so, he’s brought in Alabama transfer Jalen Hurts, who posted a 26-2 record as a starter during his career with the Crimson Tide, despite ultimately being replaced late in the 2017 season.

Hurts may have similar athleticism and running ability to his predecessor, Kyler Murray, but he never showed much acumen for getting the ball downfield. That could make it difficult for the Oklahoma offense to pick up where it left off last season.

The good news is that the backfield tandem of Trey Sermon and Kennedy Brooks returns, as does a strong receiving corps led by CeeDee Lamb, so Hurts has no shortage of playmakers around him. However, the Sooners are also replacing four starters on their offensive line, which could lead to some growing pains early in the season.

On the other side of the ball, the Oklahoma defense remains a huge concern. Despite reaching the College Football Playoff in 2018, the Sooners were one of the worst defensive teams in the country, especially against the pass.

New defensive coordinator Alex Grinch has vowed to fix things and has most of last year’s starting lineup coming back. But Oklahoma has a lot of issues on that side of the ball that won’t be easy to fix.

Perhaps more importantly, Houston has the kind of offense that can take advantage of a porous Oklahoma defense. Quarterback D’Eriq King is a Heisman darkhorse this season after throwing 36 touchdown passes last season, in addition to the damage he can do with his legs.

he Houston offense will also benefit from the return of its top three receivers, as well as the creative play-calling of new head coach Dana Holgersen, who spent the last eight seasons at West Virginia.

There’s no question that the Oklahoma offense is going to score points in this game, even if it takes Hurts a little time to get acclimated to his new team.

However, it’s hard to put any faith in the Oklahoma defense, especially against a quarterback of King’s caliber. The Sooners are likely to win the game, but don’t bet on them being able to cover the spread.