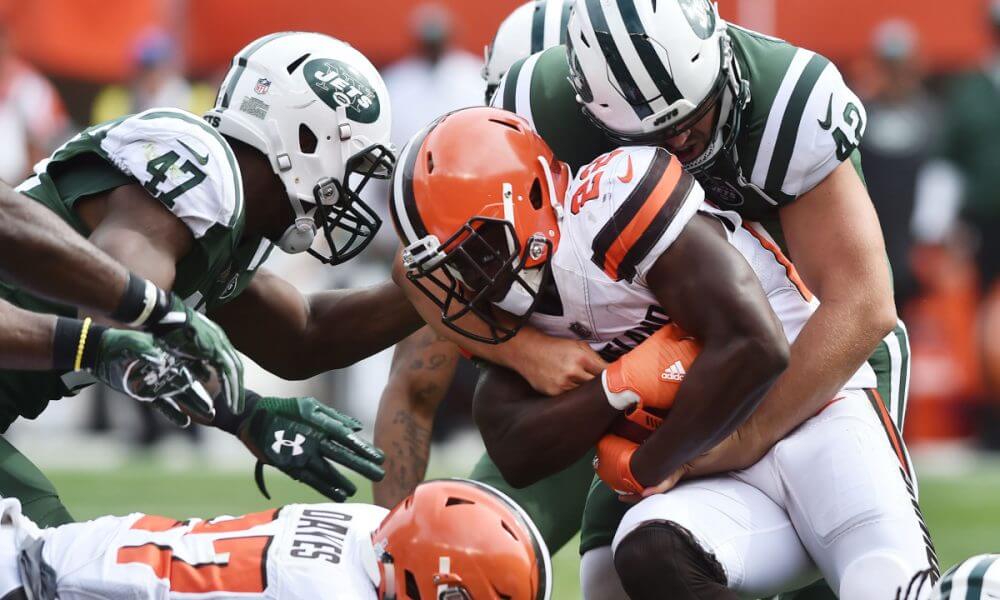 Thursday Night Football in Week 3 of the new NFL season pits the New York Jets on the road against the Cleveland Browns in a slated 8:20 p.m. start on NFL Network from FirstEnergy Stadium.

The Jets got their season off to an impressive start with a 48-17 rout of Detroit as seven-point road underdogs. As three-point favorites in their home opener against Miami this past Sunday, they came up short in a 20-12 loss. The total went way OVER BetAnySports’ closing 44-point total line against the Lions before staying UNDER 42.5 points against the AFC East rival Dolphins. New York is 2-4 against the spread over its last six games and 3-6-1 ATS in its last 10 games on the road.

Sam Darnold is the new starting quarterback for the Jets and the early results have been mixed as expected. He did throw for 334 yards and a score in the loss to Miami, but he also tossed two interceptions while getting sacked three times. The real issue with this offense is a running game that gained just 42 yards on the ground in 19 rushing attempts on Sunday.

Cleveland’s last regular season win was in December of 2016 and at 0-1-1 this season the winless streak has reached 19 games. Give the Browns credit for their straight-up 21-21 overtime tie against Pittsburgh in Week 1 as 3.5-point home underdogs. They also covered as heavy 9.5-point road underdogs in Sunday’s tough 21-18 loss to New Orleans. The total stayed UNDER 51 points against the Saints on BetAnySports closing line. The total has stayed UNDER in 11 of its last 14 games at home.

Tyrod Taylor continues to get the nod at quarterback for Cleveland with rookie Baker Mayfield waiting in the wings. Taylor has thrown for 443 yards and two scores in his first two games, while completing a very efficient 70.1 percent of his passing attempts. The Browns were in position to beat Pittsburgh and two missed field goals along with two missed extra points did them in against the Saints.

All streaks (good or bad) come to an end sooner or later and it is finally time for Cleveland to win a game outright. Lay the three points and take the Browns this Thursday night.