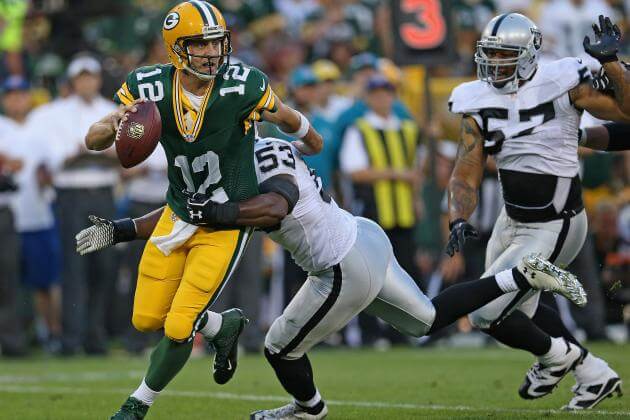 The featured matchup on NFL Network for Friday night’s Week 3 preseason schedule is an inter-conference tilt between the Green Bay Packers and the Oakland Raiders. Game time from Oakland Coliseum is set for 10:30 p.m.

The Packers have rolled up 82 points in their first two preseason games. After beating Tennessee 31-17 at home in Week 1 in a game that closed as a PICK, they outlasted Pittsburgh 51-34 last Thursday as 5.5-point home favorites. The total easily went OVER BetAnySports’ closing line in each game. Green Bay is coming off a disappointing seven-win campaign in 2017 that kept it out of the playoffs for the first time in nine seasons.

Aaron Rodgers missed nine of 16 games during last year’s regular season, but he made the most of his limited playing time against Pittsburg last Thursday with two pass completions for 35 yards and a score. DeShone Kizer added another 149 yards and two TD throws as part of Green Bay’s 280 total passing yards in that game. Joel Bouagnon led a ground game that gained 77 yards on 29 rushing attempts.

The second stint with Jon Gruden as head coach in Oakland started with a 16-10 victory against Detroit as a 3.5-point favorite at home. Last Saturday on the road against the Los Angeles Rams, the Raiders came up short in a 19-15 loss as three-point favorites. The total stayed UNDER in each of those games on BetAnySports’ closing line.

The Raiders are trying to rebound from a slide to 6-10 in 2017 after posting their first winning season since 2002 with a 12-4 straight-up record in 2016. Gruden was brought in for Jack Del Rio to get things quickly turned back around. Derek Carr remained on the bench in the loss to the Rams with EJ Manual and Connor Cook getting a chance to run the offense at quarterback. Chris Warren made a strong impression running the ball in that game with 110 yards rushing and a score on 18 carries.

Green Bay has been scoring points at a very high rate this preseason and I do have that trend continuing this Friday night. My lean is towards the Packers on the road getting three points, but I am betting the OVER at BetAnySports in this one.